Good Hair and Cosmetics- the Self Image of Our Women 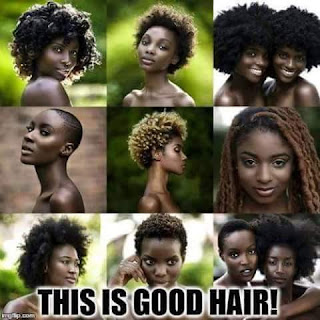 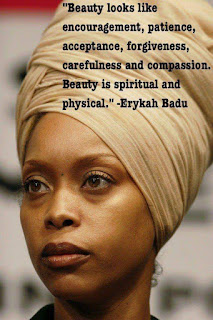 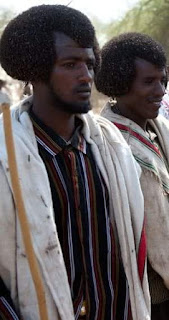 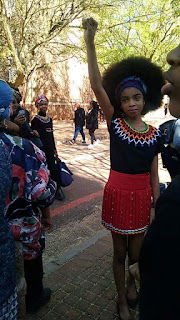 Our people have a love affair with hair. We are obsessed and fascinated by hair in all of it's variety- in the lengths, textures and colors. To think that our hair care and the cosmetic industry are billion dollar industries - and how much of this money is lost out of "our" "so called economic community," is really reflections of post traumatic Stressed/captivity/enslaved/War refugee dysfunction and self-hatred, from the attempt to live and assimilate into the very society that promotes the genocide of our people. Here is my take on the movie "Good Hair." http://en.wikipedia.org/wiki/Good_Hair_(film), 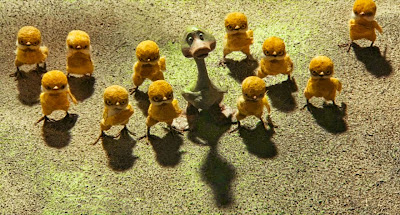 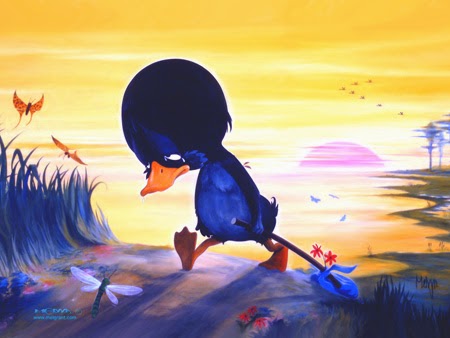 I recall the story of the ugly duckling, all of the other ducklings ridiculed and laughed at her. The ugly duckling tried to conform to the other duck's standards yet, with all of her efforts, she found herself feeling awkward, rejected and inferior. She began to believe all of the lies that were told to her about how she was inferior. She began to suffer self-hatred and disgust even to the extent of deforming herself in an effort to conform and be accepted. Ostracized and alone she went away in despair. Then, she discovered a group of young birds in the distant who sounded familiar. As she followed their voices, she caught up with them and discovered that they looked and behaved just as "awkwardly" as she!- The young birds embraced and accepted her into their group. As time progressed, she began to let go and Love herself. She healed from the damaging and cruel things that were said and done to her, and her own self hatred! She changed and transformed into a Beautiful Black Swan! You see, she was never really a duck... In nature "Birds of a feather flock together"... 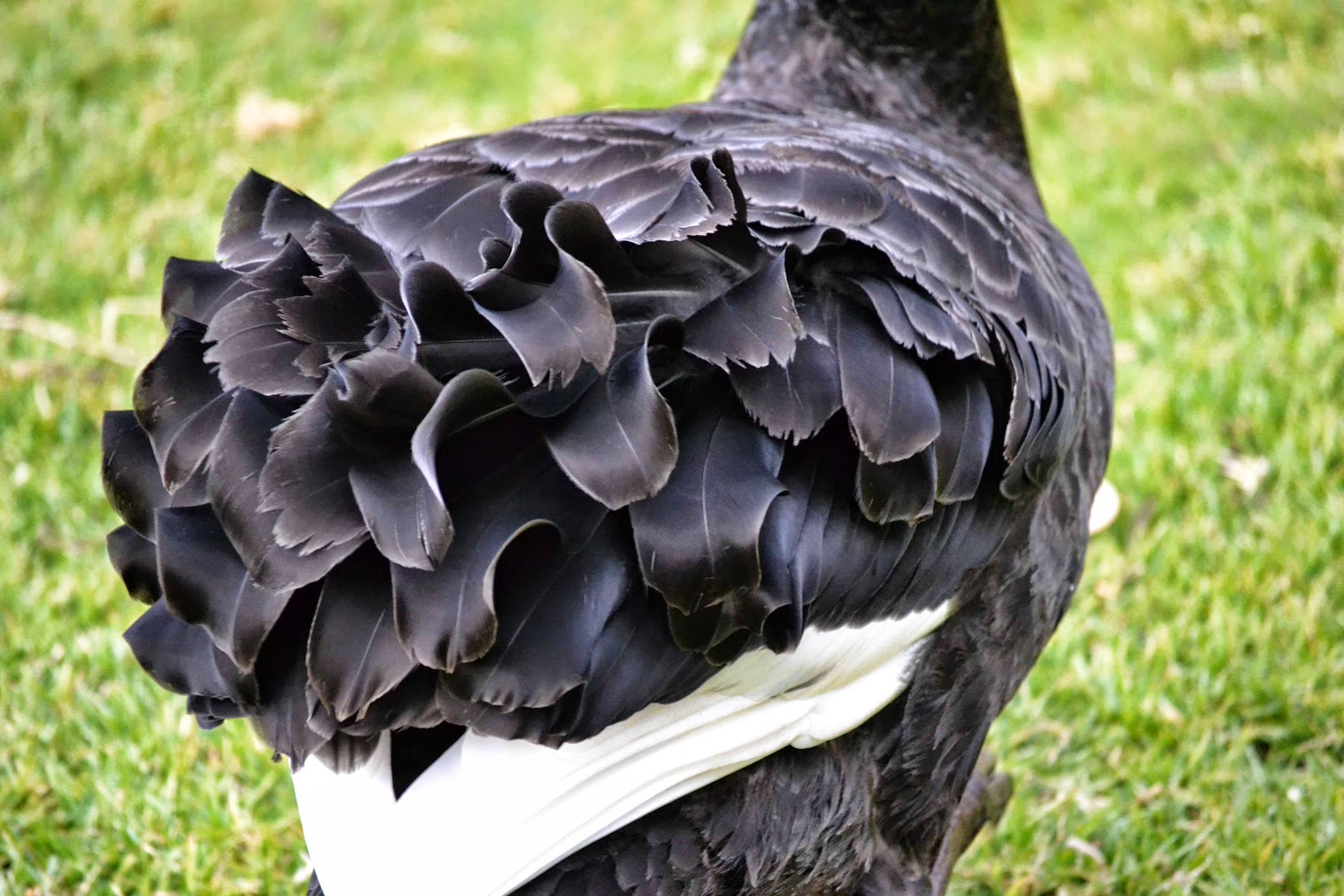 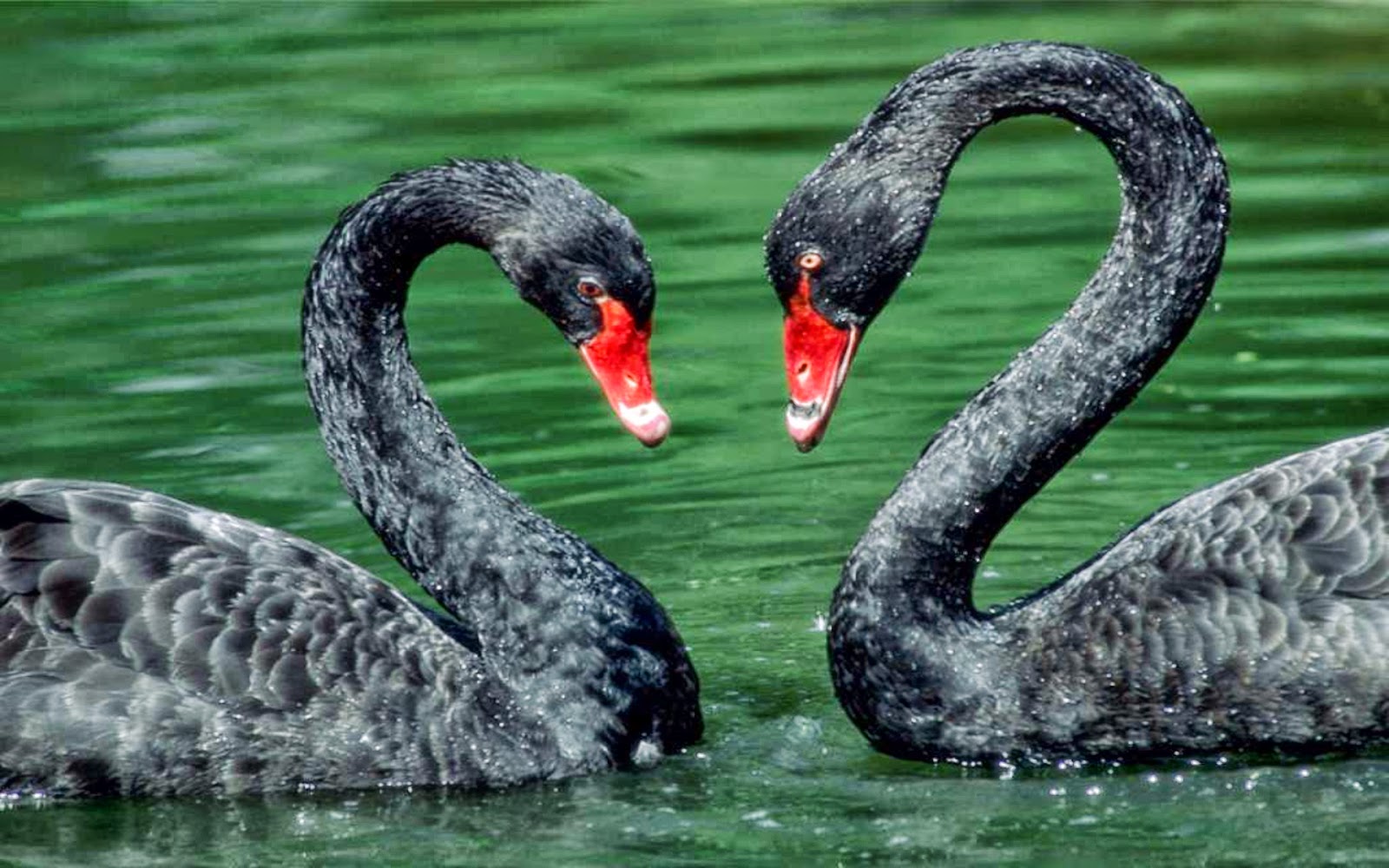 To me this story is a perfect analogy of Beautiful Black African Women! We don't know who we truly are, yet we keep trying to conform to the standards of our oppressor- who hate, fear, make-mockery-of, and reject our beauty and attributes! We in turn make fun of ourselves, caught in a "Willie lynch"- divide and conquer mentality. We try to conform by stripping ourselves of our natural beauty and corrupting and replacing our sacred temple with an alien value system, consuming the status quo of foods that are not supportive or specifically nourishing  to our temple, and adding an artificial facade of cosmetics to "makeup" a mask to hide our illnesses. We spend a great deal of our money, BILLIONS of dollars on hair, hair products, and cosmetics- from predominantly Chinese and Korean manufacturers -(who often don't even use what they manufacture!) So our women spend their money for over priced products and enormous amounts of our time in hair salons, changing our hair and skin complexion, even in plastic surgeon's clinics modifying our body parts, or, poking, burning and defacing our bodies with engraved symbols; to take the place of cultivating our inner beauty. Many do not account for the chemicals that are in these treatments and the long term effects of crippling health problems and infertility. 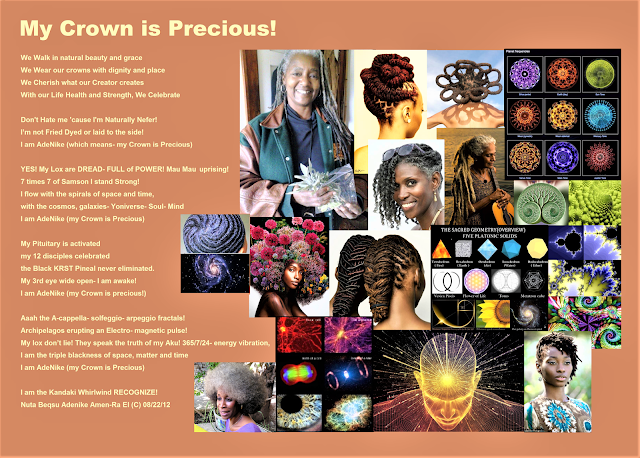 To think of how sodium hydroxide, the active ingredient in relaxers, is strong enough to burn through a soda can, left in that solution long enough, just think of how these chemicals can damage a child or women's hair or scalp over years. Also, formaldehyde, a chemical used to embalm the dead, is used. It is said that with continued use of these chemicals, the scalp is eventually cured like cowhide leather, killing the blood vessels and infusing into the blood/brain barrier, and the rest of the body. Wigs and Weaves are often sewn and glued into the existing hair or scalp. These weaves can range from artificial plastic polyester, to Indian or Expensive oriental hair. This transplanted hair can be priced up to thousands of dollars-per-lock!

In many cases, our self-hate and lowered self esteem have reduced us to behave in the most base and shameful ways. Ultimately, because we are the womb of man, our self-hatred can poison everyone around us, especially our children! These alterations not only play a role socially, but it is also a political, classist/racist and sexist phenomenon.


What is "Good Hair?" You have to consider the Brothers out there- even in Africa, who prefer their women to straighten and dye their hair as a mark of elite status. Even in the poorest areas, they want jeans and perm kits! I also think that our Black Queens have also compromised themselves in order to attract, please or patronize the distorted perspective and psychology of our Black Men- even to the extent of prostituting themselves, in their dress and mannerism. Our youth are influenced by the media, of movies, music video performers, exotic dancers and catty reality TV.  Corporate and political images of Black people are rendered with the appearance of women with weaves and perms. I recall an Afrikan news correspondent, Rhonda Lee, who was terminated, because of the insults and controversy, with the blatant apathy and lack of support from her corporate new station, who eventually terminated her over her choice to wear her hair in a short natural. African Hair is also controlled by the military.

As a High school teacher, I've heard young men, in casual conversation, stating their dream to have children with "good hair!" With their tightly coiled hair, they reasoned that they would have to breed with a "mixed" woman or a woman outside their race to get the features that they want in their children! I also remember reading Eldridge Cleaver's Book "Soul on Ice." In his interview he stated that he would lose his arousal and become impotent, if as he put his hands in his partner's hair, it would feel nappy! I have also known men who preferred women with "Blond Hair" or colored hair as psyche-sexually"kinky" preference.

Secondly, I remember the traveling study of the African American psychologist who did the study on young African American children using Black dolls and identical white dolls. Even the minds of our youngest boys and girls have been infiltrated with this pathology in their self image at such a very young age!

Finally, the hair care and cosmetic businesses are on the stock exchange as multibillion dollar enterprises. So they will push their products, like any drug,- on anyone willing to be duped into becoming "a believer!" Even our workplaces and churches push this standard, of image, with some employers refusing to hire someone without this image! I saw a movie titled "Good Hair." I had wished that this movie would have sought out to interview more conscious-(not only natural) women.
I think an individual who has awakened to consciousness, creates a momentum for that awakened spirit to begin to embrace and love who they are and stop worrying about how they compare to another group, and their standards. It is then one can grow to become the best of their true-selves in all it's beauty! MIND, BODY and SPIRIT! 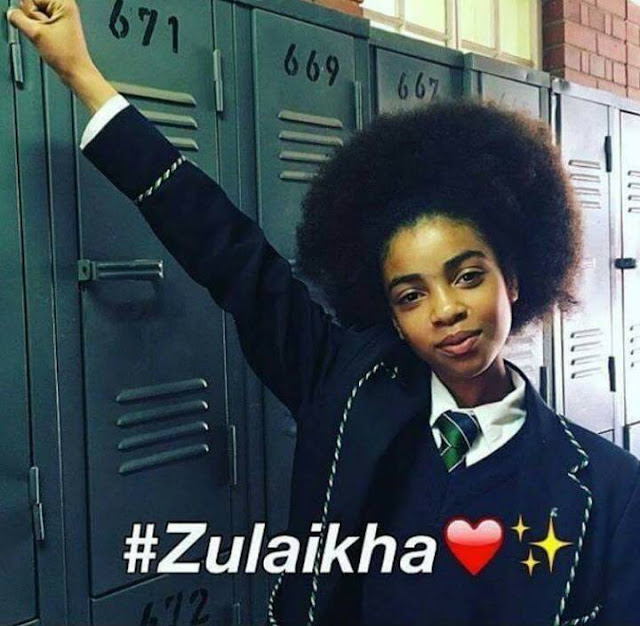 Afroslang Kushi- Commented: It is so amazing how twisted this world has become, the very thought of distancing ourselves from ourselves, the profit the logic how can we stop it. Man it feels so good to be nappy and happy
November 22, 2009 at 1:10pm

Peter McCarthy- Commented: I totally agree with you Adenike. The spell & sickness of our people has equally polluted the minds of both sexes equally! Even though most of us men do keep our hair natural we too have been brain-dirtied into believing the eurocentric image of beauty holds true, even for our sistas. Which is sadly why many of our brothers want their nubian women to more caucasian not only in looks but attitude as well!
November 22, 2009 at 1:42pm


Xodu Xoahk Xodu- Commented: It is also interesting how even the native African Women who move to America have hair issues as well. A lot of them appear to be {{nappy not happy}}.OH, & what about the trend i saw in 2003 JOHANESBURG, where the African woman is bleaching her skin?
November 24, 2009 at 7:01am


Raquan Allah Supreme- Commented: Peace Sista....I must say I agree with you...the ignorance of the science of hair indeed is programed within our society, & is a Pin inside many of our brothas & sistas head. No matter where I go..the fake hair natural hair is an issue. This is mos def not only a lack of knowledge, but also a lack of love for "Self"...yet most people don't know who they are!!!

Nuta Beqsu, is a Queen Ma of many Suns, Daughters, Grand Princesses and Princes, living in the urban Kansas City Area. Looking for solutions to the cycles of violence, health disparities, poverty, and inequalities in wealth, she opened the Amen Par Ankh, a Natural Life Center, and Amen Ankh Urban Farm. This is a green space for Child Care, Home Scholars, an Independent Library and Home Blessings and Notions. She is a blogger and respected public speaker and educator who has conducted several workshops at various organizations, served as a panelist and as keynote speaker at regional meetings. Nuta Beqsu means (heaven gives me balance) Nu, Nut, & Ta are Elemental powers of the Heavens: Nut is Atmosphere, the Celestial Night Sky Goddess. She represents the cosmos and the universe. The Universe is always giving birth to new solar systems and stars. Nu is Moisture, and Water. The Primordial source, the vast sea, the waters of the womb of Ankh. Ta is the original word for land. Our land is our home, and the place for the empirical existence that we are experiencing. She seeks to live in balance between the planetary and heavenly existence. We are all connected to the land, trees, microcosm and macrocosm, Inner verse and universe. Nuta Beqsu (heaven gives me balance) will be programmed into conscious spirit, to produce thought sequences to direct a course of action as way to achieve successfulness in life. Visualization is thought converted into a pleasurable visual image(s) to achieve a goal and/or purpose. We connect with Divine Power to guide and direct our pathways. As a divine name is spoken the receiver has unity of direction in life. Her name reflects her Destiny. So, the sight Sound, vision, smells and colors associated with a divine name will give guidance in her pathway. Amen Par Ankh offers Consultations for Destiny, Name, Health, Career and Relationships. Call for your appointment: 816-839-7945 Feel free to Contact the Amen Ankh Urban Farm... amen.ankh@live.com or amen.parankh@gmail.com Please like our facebook pages: https://www.facebook.com/Green.Griot https://www.facebook.com/PARANKH , https://www.facebook.com/Amen.Ankh.Farm , https://www.facebook.com/Adenike.Art , https://www.facebook.com/pages/Ankh-The-Way-of-Life-Communities/140162689375565
Posted by Amen Par Ankh at 12:39:00 AM No comments: Links to this post

Amen Par Ankh
Amen Par Ankh is a Sacred Temple of Life- We are a KRST conscious Community. Our Bodies are a sacred temple of life... We Grow Food to restore balance in our relationship with our bodies and the cosmos, earth and our Natural communities by increasing awareness of Life, Health and Environment. We are a Maafia a "Healthy Place To Live" Amen Ankh Urban Farm’s Mission is to produce, promote, and perpetuate food, resources and comfort and to grow local healthy Indigenous Foods in environmentally, respected, earth gentle ways.
Newer Posts Older Posts Home
Subscribe to: Posts (Atom)